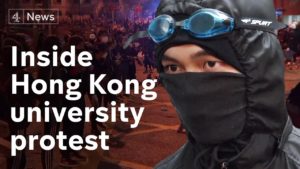 Dozens of mainland Chinese and foreign students studying in Hong Kong have left the city as Hong Kong universities suspended classes in the wake of major battles on campuses between students and police.

A number of Asian and Western governments have urged their students to leave Hong Kong university campuses amid fears that universities will be a new battleground of protests that are now in their sixth month.

Some mainland Chinese students said they feared being caught up in a backlash by emotive Hong Kong students as ongoing protests take on a more radical anti-Beijing turn, while others said they were simply moving temporarily to safer places until the turmoil dies down.

Taiwan’s Mainland Affairs Council (MAC), which handles relations with Beijing, issued a notice telling Taiwanese students to return to Taiwan. MAC said on Thursday just over a third of Taiwan’s 1,021 students in Hong Kong had already returned, including 140 from the Chinese University of Hong Kong (CUHK).

Around 80 South Korean students have flown home from Hong Kong this week, some 30 of them escorted out of CUHK by the South Korean consulate on Wednesday.

Sweden, Norway and Denmark have all urged their exchange students not only to leave campuses but to consider leaving Hong Kong in light of the escalating violence. Other governments have said they are closely monitoring the situation.

In Hong Kong police have said that, of more than 4,000 arrests since protests began in June, around 850 are tertiary education students and more than 750 are secondary school students.

On Thursday the Hong Kong High Court dismissed an urgent bid launched by CUHK student leaders to bar police entry to the campus.

But Wilson Wong, CUHK associate professor in the department of government and public administration who lives on staff quarters on campus, was quoted by Hong Kong’s South China Morning Post newspaper as saying that most university staff had left the campus by Thursday.

“I think senior management are arranging the pick-up service to evacuate staff and students because they expect police may invade the campus soon,” he said, adding that “protesters have taken over the campus. There are increasing risks of police getting tough on protesters on campus.”

CUHK has called off all classes on campus until January, “in view of the escalation of social movements across the territory, the continuous disruption to public transport services, as well as the severe damage done to facilities on campus,” it said in a statement issued on Wednesday.

It expressed “deep regret and strong condemnation over the sequence of conflicts and violent, unlawful activities which took place on the campus” on Tuesday.

“Despite multiple attempts to coordinate and negotiate with both parties made by the vice-chancellor and senior management, the negotiation ultimately failed due to sustained confrontation. Petrol bombs and injurious objects were continuously thrown by the crowd present during the confrontation, while the police fired volleys of tear gas and rubber bullets.

“The university is saddened to learn that a number of colleagues and students were injured in these incidents.”

Hong Kong University of Science and Technology (HKUST) and PolyU said their campuses would be closed all week, while Hong Kong Baptist University President Roland Chin announced the suspension of all on-campus face-to-face classes, to be replaced by online classes postponed to the next semester, which starts in January.

“Students’ safety is our number one concern, while teaching and learning is our primary mission,” Chin wrote.

HKU said in an email to students on Thursday that classes were suspended for the rest of the semester but that teaching and learning would be made accessible online. “This will enable students to stay away from campus and even leave Hong Kong if they wish, while at the same time completing their courses and assessments,” it said, providing information for foreign students who wished to leave Hong Kong.

A number of US universities including the University of South Carolina have told their students to return home. Syracuse University, which has an exchange programme with CityU, which saw teargas attacks on Monday, said it would cut short its Hong Kong study abroad programme for this term, chancellor Kent Syverud announced in an email to students, faculty and staff on Wednesday, citing deteriorating safety and security because of protests.

However, he added that the university did not believe students were in imminent danger.

“Until recently, protests were localised and our students attended class and safely experienced the city by observing common sense precautions,” Syverud wrote. “Over the past several months, protests have escalated, with significant disruption to mobility and public transportation.”

The University of California Education Abroad Program decided on Wednesday to suspend its spring study abroad programme in Hong Kong, citing concerns for student safety amidst the ongoing protests, according to Executive Director Vivian-Lee Nyitray. There are currently 79 University of California students in Hong Kong attending HKU, CUHK and HKUST.

Nyitray said the university had been monitoring the situation since the summer, “so this wasn’t a decision that was either made lightly or out of any kind of haste or panic,” but added that students were not being “actively evacuated”; they are being given the option to end the programme early.

In the UK, the University of Warwick said: “Like several other UK universities we are contacting Warwick students and staff in Hong Kong and offering them the opportunity to return to the UK and are advising them to do so.”

An email sent to students stated the university had been closely monitoring the developing situation in Hong Kong and had reached the decision that “it is no longer appropriate for our students to remain”.

The University of Nottingham, also in the UK, said it had also offered flights home to any students concerned about their safety.

DTU Rector Anders Overgaard Bjarklev said he received reports of students forced to move out from university dormitories “because they had been set on fire”– reports that have not been confirmed on the ground in Hong Kong – and that Molotov cocktails had been thrown near university campuses.

Other students from Scandinavian countries said they were being accommodated in hotels as a precaution.

“We’re being sent to a hotel now. I don’t really know what is going on,” said Elina Neverdal Hjønnevåg, a student at Hong Kong Baptist University.

A notice from HKUST on Wednesday said buses would be running every 15 minutes from 10.30am to 4pm from the university to an MTR (Hong Kong’s metro) station, where students could take cross-border shuttles or the high-speed rail to the mainland.

“While we are not aware of any imminent threat to campus safety, we understand some staff and students have the desire to leave campus,” the HKUST email reads, adding the university would deal flexibly with academic issues.

At the CUHK campus on Wednesday students were picked up by coaches bound for mainland China. Police also sent a boat – CUHK is situated on the seafront.

“A group of mainland students, unable to leave the pier because nearby roads were blocked and because of the presence of those in black shirts, called for police assistance after feeling a threat to their personal safety,” a police spokesman said, referring to protesters who are normally clad in black.

“Considering the safety issues and the blockage of roads nearby, police deployed a launch to assist the students to leave and go to a safe location. The students later left by their own transport,” police added.

Twelve hostels in Shenzhen in China are offering free accommodation for seven nights to mainland students enrolled in Hong Kong universities, in an initiative organised by the Shenzhen Communist Youth League, while mainland alumni groups are sponsoring taxis to drive students to the border crossing.

The CityU Shenzhen Research Institute said it could arrange for about 200 students to stay and study.

But some mainland students who said they preferred to stay indicated that they were not given a choice as Chinese authorities bought tickets for them “based on personal information collected before”.

Some students said on social media they were leaving only temporarily for Shenzhen, just across the border from Hong Kong, with some saying it was because their parents were fearful for their safety.

Others said that with CUHK and other universities virtually under siege and many roads to and from the campus blocked, they feared that normal life, including getting food on campus, would become difficult. “We don’t want to be trapped here,” one wrote on social media, referring to CUHK.

Many mainland students said they feared being targeted if they spoke Mandarin on campus. The main language in Hong Kong alongside English is the southern Chinese dialect of Cantonese. In recent weeks, as Beijing has been seen as pursuing a particularly hard line on the Hong Kong protests, mainland Chinese targets such as businesses and banks have been vandalised and daubed with graffiti.

Some students from Taiwan who also speak Mandarin said they feared being mistaken for mainlanders, but many said they preferred to remain in Hong Kong.

National Taiwan University (NTU) said in a statement issued on Thursday its exchange students in Hong Kong had been contacted and advised to return to Taiwan. “NTU and its partner universities will work closely together to provide assistance in terms of students’ academic affairs and additional support,” it said.

NTU also said it was willing to accept exchange students “from our global partners originally headed for Hong Kong to enrol at NTU”, the NTU office of international affairs said in a statement.

National Tsing Hua University in Taiwan said that it would accept “the transfer of Taiwanese students, Hong Kong students and foreign students studying in Hong Kong. Providing a quality learning environment, accommodation and coaching mechanism, [it] will do its best to help these students complete their studies,” including transfer of credits. It added that it would provide 100 hostel beds “for this wave of students”.

National Chiao Tung University, Taiwan, which has a partnership agreement with CityU, said it could accommodate Hong Kong students who wanted to leave.