Many More Universities to Close Due to Coronavirus Situation in Europe 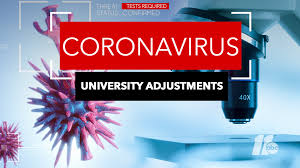 As the Coronavirus situation in the world is getting worse and worse, many governments are raking actions to close down universities which also effects exchange students from other countries studying in those universities.

France, Ireland and Norway on Thursday joined a quickly lengthening list of European countries announcing mass closure of universities as part of a wider effort to halt the communal spread of the coronavirus, but the United Kingdom is so far holding out.

French President Emmanuel Macron announced in a speech on television on Thursday that schools, universities and colleges across France would be closed down from 16 March for an undetermined amount of time in response to the “biggest health crisis that France has known in a century”.

France is Europe’s second most affected country, behind Italy, which has been completely locked down by its government. As of 12 March, France had 2,876 cases of coronavirus and 61 deaths, according to government figures.

“It is one of the most serious health crises France has ever faced,” Macron said. “In spite of our efforts to stop it, the virus is still spreading.

“For our collective interest, from Monday and until further notice, nurseries, schools, colleges, high schools and universities will be closed. Closed for a simple reason: our children and our youngest, according to scientists, are the ones who seem to spread the virus the fastest.”

Ireland’s Taoiseach (prime minister) Leo Varadkar, also on Thursday, announced the closure of all schools, pre-schools and further and higher education institutions, for the period up to 29 March, to support efforts to contain the spread of COVID-19.

All pupils and students, from pre-school to tertiary level, were urged to practise social distancing, and to minimise physical contact with each other, to help avoid the spread of COVID-19. This should include minimising social contact, avoiding meeting up and keeping physical space between them.

Physical classes in universities and higher education facilities will not be held during the closure. Institutions have been told to make other arrangements for teaching and learning online or remotely in line with their business continuity plans and contingency planning.

On Tuesday, Greek Health Minister Vassilis Kikilias announced that all of the country’s schools and universities would remain closed for the next 14 days.

The European Centre for Disease Prevention and Control or ECDC noted on 12 March that as of 11 March 2020, 118,598 cases of COVID-19 were reported worldwide by more than 100 countries. Since late February, the majority of cases reported have been from outside China, with an increasing majority of these reported from European Union/European Economic Area (EU/EEA) countries and the UK.

The ECDC said: “The EU/EEA and the UK are quickly moving toward a scenario of sustained community transmission of COVID-19. The situation is evolving very quickly and a rapid, proactive and comprehensive approach is essential in order to delay transmission, as containing transmission to local epidemics is no longer considered feasible.”

Among the social distancing measures that should be implemented “early in order to mitigate the impact of the epidemic and to delay the epidemic peak” are the suspension of mass gatherings; social distancing at the workplace, including use of teleworking, suspension of meetings and cancellation of non-essential travel; and measures in and closure of schools, although it did not specify universities.

In the UK Prime Minister Boris Johnson has faced questions over why the UK is not following its neighbours in closing schools and universities now. The government response has been that it is considered too early in the development of the epidemic in the UK.

Keith Neal, emeritus professor of the epidemiology of infectious diseases at the University of Nottingham, said it was still too early to say whether steps taken in Ireland were a “sensible precaution or an overreaction for the current stage of the epidemic”.

He said different countries are at different stages of the epidemic so what one country should do will not apply to others. “We need to be guided by the local epidemiology and the science.”

However, Durham University has announced that from 16 March all classroom teaching will be replaced with online lectures as much as possible for the rest of the spring term.

Ireland’s Minister for Education and Skills, Joe McHugh, said closing schools and universities was “the right decision at the right time”.

“It is taken in the best interests of our children, our young people, our school and college communities and our wider society.

“At this point in time the closure is planned for two weeks, until 29 March. The government, in conjunction with the public health authorities, will keep the situation under ongoing review. Any change to that date will be communicated widely.

“This is a very challenging time for our pupils, our teachers, our students and our colleagues in further and higher education.”

Provost of Trinity College Dublin, Patrick Prendergast, told staff and students in an email on Thursday that students who are not residents will no longer have access to the campus until 29 March.

Although the government’s announcement initially only covers the period until 29 March, Prendergast warned that “it would be wise to allow for the possibility of a longer closure”, according to a report in The University Times, the university’s student newspaper.

He said all of Trinity’s libraries will close but off-campus access to licensed electronic resources – books, databases and journals – will be available to registered students and staff.

“We are liaising with academic staff to ensure the availability of additional, online texts to meet remote learning requirements,” Prendergast wrote.