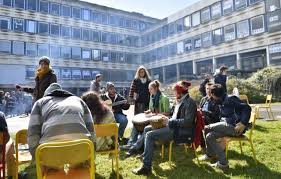 France has been becoming one of the significant destinations for non-EU university students with especially Indian and Chinese students as well as scores of students from Asian nations. Also the affordable fees as well as the freedom in French education culture contributed to this. However, The French Council of State has approved the controversial increase of university fees for foreign students from outside the European Union, from €170 (US$191) to €2,770 (US$3,115) a year for a bachelor-equivalent degree and from €243 to €3,770 for a masters degree.

In France, student fees are fixed by the government, so the ruling means the sixteenfold rise in fees for non-EU students will be implemented.

The Council of State, France’s highest jurisdiction, rejected appeals by organisations, including student unions, against the increase, which was announced by French Prime Minister Édouard Philippe in November 2018 as part of the government’s strategy to promote French higher education abroad.

It was due to take effect from the 2019-20 academic year, though very few universities have introduced the increase, continuing to charge foreign students the same fees as French and EU students.

The State Council’s decision on 1 July apparently contradicts a ruling of the Constitutional Council in October 2019 that free access to public higher education was a constitutional right, though ‘modest’ student fees could be charged “taking into account, where necessary, the financial capacity of the students” – though it did not define ‘modest’.

But now the Council of State has ruled that the increased fees did not present an obstacle to equal access to education, as students, including those who were ‘internationally mobile’, could be eligible for financial benefits and exemptions.

“The Council of State tells us the opposite of the Constitutional Council. The cost is not assessed according to the student’s circumstances but according to the cost of the education and the existence of grants. It tells students that €3,770 is modest! That’s what we pay in the provinces for a year’s accommodation!” she told Libération.

The student federation FAGE said the Council of State’s decision “sealed the fate of international students outside the European Union, by making a social selection by money; but has also just opened a very dangerous door for French and European students”.

The charges of €2,770 and €3,770 were by no means modest, representing several months of expenditure on rent and food; and it created a serious precedent, leading to fears of increases in student fees in other sectors of public higher education, said FAGE.

Withdrawal of state funding for higher education would not be compensated for by foreign students paying more, it said.

The Ministry of Higher Education, Research and Innovation said in a statement that the Council of State had judged that the differentiated fees conformed to the requirements fixed by the Constitutional Council. The Council of State had noted that fees only represented 30% to 40% of the initial cost of education and should be considered as a whole, together with all the exemptions and benefits made available to students from abroad.

The ministry said the decision settled all the questions which had until now constrained the ability of institutions to exercise their policies to attract students, while safeguarding the means of exemption and financial support necessary for the welcome of all international students whatever their countries of origin or standard of living.

The ruling means it is now clearly spelt out that universities can go ahead and promote themselves abroad and offer improved services with the extra funding, although more disadvantaged students would not lose out because they could claim benefits.

Previously, the Conférence des Présidents d’Université has said the fees increase “constitutes a change of paradigm in French policy, all the effects of which it is difficult at this stage to appreciate”.

It also warned that new resources must enable universities to improve the services they provide for foreign students, but they “must not provide a pretext to reduce the funds allocated to universities on the grounds that they were benefiting from new resources”.